South Africa has decriminalized cannabis, but is it ready for larger scale commercialization?

South Africa is known for its cannabis-friendly policies. They have, in fact, legalized cannabis by decriminalizing private personal use and cultivation. But does this legal shift pave the way for commercial cannabis in South Africa? Maybe not for the recreational market. However, South Africa’s medical marijuana program already relies heavily on imported cannabis from Canada. Currently, firms such as Aphria, Aurora, and Canopy Growth are operating in South Africa.

South African cannabis laws have always been a bit different. The plant was criminalized in 1928 for political and moral reasons, like in much of the world. Despite these laws, usage of the plant, locally known as dagga, remained widespread in South Africa. To double down on prevention, the 1971 Abuse of Dependence-producing Substances and Rehabilitation Centres Act was passed, and later the Drugs and Drug Trafficking Act of 1992. These laws criminalized dagga possession.

However, in 2018, the South African Constitutional court ruled that dagga criminalization acts were unconstitutional and violated a person’s presumption of innocence by automatically classifying a person a dealer if they were found in possession of more than 115 grams of dagga.

Along with 2018 decriminalization came an amendment to the Medicines and Related Substances Act that rescheduled cannabidiol (CBD) products from Schedule 7 to Schedule 4. CBD in South Africa can be obtained from a pharmacist by prescription.

In South Africa, recreational (personal use) cannabis is not regulated. While dagga is decriminalized there still may be legal consequences. Both of these elements arise because it is not legal to buy or sell cannabis in South Africa. The government itself explains that to get dagga you need to either grow it on your own property or be gifted it by another private grower.

The legal consequences of ensuring that dagga is not being bought or sold falls on South African law enforcement. The South African Central Drug Authority itself seems to support decriminalization of dagga and likewise do not support commercialization of cannabis. Despite this, South Africa has a thriving medical marijuana program with growing demand.

Medical marijuana was legalized in South Africa in 2017 under the Cultivation of Cannabis and Manufacture of Cannabis-related Pharmaceutical Products for Medical and Research Purposes regulations, which state medical cannabis will be governed by their Medicines and Related Substances Act of 1965.

The Cultivation of Cannabis and Manufacture of Cannabis-related Pharmaceutical Products for Medical and Research Purposes regulations is comparable to Health Canada’s GPP regulations for cannabis. South Africa itself does not have any registered medical marijuana products or licensed producers of cannabis. North American cannabis companies from Canada have been their main source of cannabis.

The Cultivation of Cannabis and Manufacture of Cannabis-related Pharmaceutical Products for Medical and Research Purposes regulations cites Sections 21 and 22A(9)(a)(i) of the Medicines Act saying that:

“… authorised practitioners can apply to SAHPRA for permission to access and prescribe unregistered medicines when intended to treat individual patients. Cannabis containing products intended for medicinal purposes may thus be made available, in exceptional circumstances, to specific patients under medical supervision. Authorisation is dependent on the submission of an appropriate dosage regimen, an acceptable justification for the proposed use, and regular reporting to SAHPRA.”

The South African Health Products Regulatory Authority (SAHPRA) considers cannabis and cannabinoid-containing medicines to be unregistered medical products and governs the process for their importation along with the Department of Health. In order for firms to export their cannabis to South Africa they must have a permit issued by the Department of Health and a licence issued by SAHPRA.

How to Get a Cannabis License in South Africa

Applications for the above licenses may be made on the basis of a site plan and site master file, prior to construction of the facility. However, all completed facilities will be inspected for compliance with all requirements. In addition to the licence application to SAHPRA, Applicants will also be required to apply to the Director-General of Health for a permit to comply with the terms of the provisions of Section 22A(9)(a)(i) of the Medicines
Act to acquire, possess, manufacture, use or supply Cannabis for medicinal use.

The regulatory framework outlines record keeping procedures in a general way, that match up closely with the pre-existing Canadian model. This includes stipulations that a licence holder should ensure that information created, sent and received in the course of conducting their business is appropriately recorded for the purposes of:

The level of detail to be included in a particular record will need to factor in the complexity of the issue being addressed and any regulatory requirements that apply to the particular record.

As part of the application process Applicants are required to provide details of the arrangements in place to undertake record keeping activity. A robust seed-to-sale system like GrowerIQ is one way to ensure compliance with these record keeping guidelines.

As part of the application process Applicants are required to provide details of the arrangements in place to undertake record keeping activity. GrowerIQ can provide you with these records.

What Does Your Seed-to-Sale Platform Need to Track?

Applicants must develop and implement a document management system which will allow all processes and procedures which may affect the quality of the product to be recorded in the documentation for each batch. The following in particular must at least be documented:

Reports of soil analyses must be kept available in the dossier addressing “Location”.

All batches originating from one location must be clearly labelled (e.g. with a batch number). This must be done as early on in the process as possible. Batches originating from different geographic locations may be combined only if guaranteed to be the same, and if ensured that the mixture is homogenous. Mixing of batches must be documented. It must be recorded in the documentation for each batch that the cultivation, harvest and primary processing procedures were in accordance with these requirements. 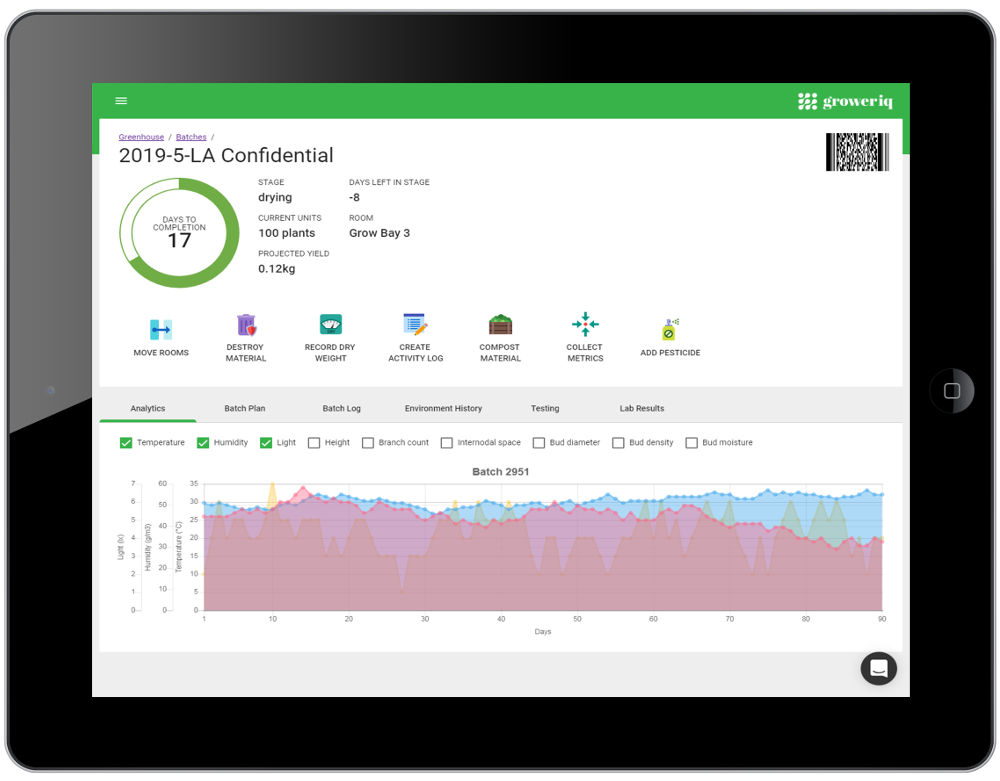 On the legal front CBD has recently be re-scheduled from Schedule 7 of the Medicines Act (being a highly regulated substance) to Schedule 4 (substances that can be sold with a prescription). In addition, some products with THC levels of less than 0.001% and less than 0.0075% of CBD have been excluded from the list completely. Products that fall outside these ranges continue to be restricted and require a medical practitioner's prescription to be sold.

More firm legal guidelines for personal use are expected towards the end of 2020. Currently, South Africans can legally possess up to 600 grams of cannabis per person, with a maximum of 1,200 grams per household (public possession limit is 60 grams). South African neighbors Lesotho and Zimbabwe have also adopted liberal cannabis policies and entered into partnerships with Canadian cannabis producers. Outside of personal cultivation and personal gifting, the medical marijuana program is the main way that South Africans access cannabis.

While the path towards full legalization is unclear, what IS abundantly clear is the market potential - both in terms of domestic market and natural advantages. Prohibition Partners estimate that the South African cannabis market could be worth nearly $2 billion USD by the end of 2023. Cultivators are poised to take advantage of the country's rich agricultural tradition, affordable land, and abundant sunshine.

For Canadian companies interested in participation, we featured support being offered by the government in an earlier post: the Canadian Trade Commission offers support to Canadian cannabis firms looking to expand internationally.

This discussion only scratches the surface. Let's discuss your project in order to build a cannabis cultivation plan that best supports your needs. Our consultants can help, both in planning your project, and with the tracking technology you'll need to satisfy SAHPRA. Learn more by filling out the form below, or starting a chat with us to the right!


Speak To A Cannabis Consultant Now

What Does it Take to Become a Master Grower?

GrowerIQ is a complete cannabis cultivation management platform, designed in partnership with Master Grower, Shlomo Booklin. Ours is the first platform to integrate your facility systems, including sensors, building controls, QMS, and ERP, into a single simplified interface.

The company built insights from Shlomo's 30+ years of agronomist experience right into the platform. GrowerIQ leverages proprietary machine learning technology to improve facility automation and provide cultivators with insights to improve quality and consistency. GrowerIQ is changing the way cultivators use software - transforming a regulatory requirement into a robust platform to learn, analyze, and improve crop performance.

Get started in only a few minutes.